I also proved the parametric version of TT and the jet version. As an application of the jet version, I deduced that the set of Morse functions on a smooth manifold forms an open and dense subset with respect to the strong topology. I proved homotopy invariance of pull backs. This reduces to proving that any two vector bundles which are concordant i.

In the end I defined isotopies and the vertical derivative and showed that all tubular neighborhoods of a fixed submanifold can be related by isotopies, up to restricting to a neighborhood of the zero section and the action of an automorphism of the normal bundle. I first discussed orientability and orientations of manifolds.

I proved that this definition does not depend on the chosen regular value and coincides for homotopic maps. This allows to extend the degree to all continuous maps.

I continued to discuss the degree of a map between compact, oriented manifolds of equal dimension. The main aim was to show that homotopy classes of maps from a compact, connected, oriented manifold to the sphere of the same dimension are classified by the degree. I used Tietze's Extension Theorem and the fact that a smooth mapping to a sphere, which is defined on the boundary of a manifolds, extends smoothly to the whole manifold if and only if the degree is zero.


I stated the problem of understanding which vector bundles admit nowhere vanishing sections. Time permitting, we will then look at singular homology and cohomology, the relation between singular and de Rham cohomology via the de Rham theorem, and Morse theory. It is expected that you will have taken the courses Algebraic Topology M3P21 and Manifolds M4P52 , or have learnt the relevant material elsewhere.

There will not be very much overlap between the theory in the two courses, but the practice of working with manifolds will be useful both ways. 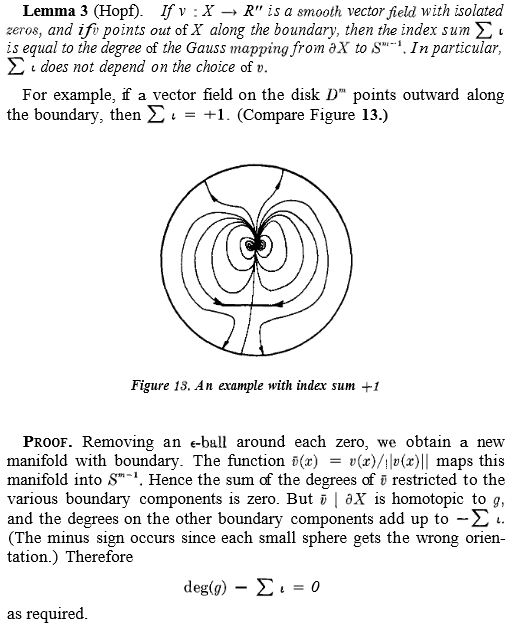